The Financial Impact of the Pandemic on Workers and Their Families 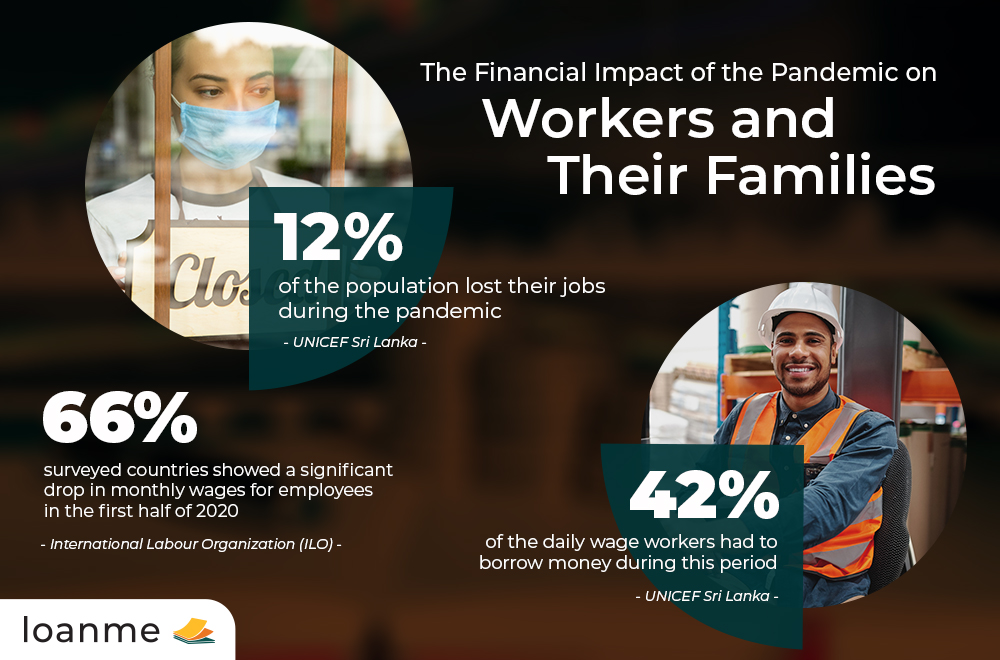 The COVID19 pandemic has had a drastic effect on the lives of people across the globe. Be it high-salaried individuals or low-income workers – the pandemic had its toll on everyone. Amongst those who experienced the greatest financial losses and deterioration in well-being were vulnerable workers and their families.

Workers in certain industries were also more heavily affected than others. Those employed in sectors such as travel and tourism, recreational services, transport and production found themselves in severe financial distress as these were some of the industries that were the most hit by the pandemic.

The problems that were created by the pandemic led to numerous people facing unprecedented challenges that they simply did not know how to tackle. In addition to growing health concerns, most workers faced a severe loss of income and were unable to provide for themselves and their families. As such, the pandemic was undoubtedly a period of severe distress for many – financially as well as emotionally.

How Has the Pandemic Affected Workers Financially?

There were many challenges that were caused by the pandemic, leading to a number of financially-difficult situations for workers. Below are some of the situations that workers faced:

Unemployment Due to Company Layoffs

The pandemic was an extremely tough time for people and businesses alike. Certain companies – especially those in industries that were heavily affected, such as hotels, travel agencies, airlines and transport services – were forced to reduce their workforce in order to reduce costs. As such, several companies carried out lay-offs, leading to a massive increase in unemployment for workers.

A study conducted by UNICEF Sri Lanka states that 12% of their surveyed population lost their jobs during the pandemic period and have not yet got them back. Source

By reducing their staff count, companies hoped to bring down their operational costs, in order to stay afloat during the pandemic – when survival for many businesses was at stake. Due to such layoffs, more and more workers and employees found themselves in a state of unemployment and no income, with no way to meet their day-to-day expenses.

Similar to layoffs, several companies were also forced to issue reduction in pay to their employees and workers during this period of time.

A research conducted by the International Labour Organization (ILO) finds that two-thirds of surveyed countries showed a significant drop in monthly wages for employees in the first half of 2020, due to the effects of the pandemic.Source

Companies that decided to do so included those with employees who were unable to conduct their workplace duties due to lockdowns, travel restrictions and other pandemic-related problems. There were also companies that were suffering financially during the pandemic and were forced to issue pay cuts because they could not afford to bear the expenses of their usual labour costs. As such, several workers and employees faced massive losses in income – putting them in an extremely difficult spot financially.

Another phenomenon that was witnessed during the pandemic was that most companies decided to put a halt on all their on-going recruitment processes – in an effort to reduce their expenses as much as possible. These companies made the conscious decision to not invest in manpower during the pandemic and not to expand their workforce. By doing so, they hoped to invest that money in other areas such as digitization – which was observed to be a very common trend. This resulted in a massive reduction in hiring opportunities and vacancies, making it extremely difficult for workers and employees to secure a new job.

Another study conducted by the International Labour Organization (ILO) states that global unemployment levels are expected to reach over 200 million people by 2022 – as a result of the pandemic.Source

Daily wage workers who sought their income on a day-to-day basis were arguably the individuals who were the most affected during the pandemic.

A study conducted by UNICEF Sri Lanka states that 42% of daily wage workers had to borrow money during this period and 35% of them also had to pawn their belongings in order to support themselves.Source

Due to the numerous lockdowns, travel restrictions and border controls that were enforced in several countries in a bid to control the spread of the virus, workers found themselves unable to head out and earn their daily income to support themselves and their families. As such, many workers found themselves in a situation where they were locked out of their livelihoods and risked facing extreme poverty and hunger. From maids to housekeepers to taxi drivers – these individuals were forced to deal with having no income to meet their day-to-day expenses.

Workers who had plans of traveling to foreign countries in order to find employment also found their plans being brought to a sudden halt. Most foreign countries had enforced strict restrictions on which countries were permitted to enter – as a precautionary measure to help curb the spread of the virus and also prevent potentially new COVID19 variants from entering their countries. As such, traveling overseas to work seemed to be out of the question for most individuals. Migrant workers abroad also found themselves stranded, with no means of returning to their homelands during the pandemic – which proved to be a period of great distress for many.

Needless to say, the pandemic caused numerous health concerns for almost everyone around the world. Not only were people forced to remain in constant vigilance about contracting COVID19 by safeguarding themselves at all times, they also had to bear the worry of protecting their loved ones – specially their loved ones who were at risk. Those who were infected had to bear the expenses of medical care, whilst others had to bear the additional expenses of carrying out PCR tests, Rapid Antigen Tests and bear doctor consultation fees in order to confirm their exposure to the virus. It was also observed that mental health problems such as anxiety and depression were also on the rise during the pandemic, only leading to more healthcare expenses.

How Has LoanMe Offered Financial Support During the Pandemic?

We understand that the pandemic has been a financially difficult period of time for everyone. As such, we continued to offer our loan services throughout the pandemic and lockdowns – to help people gain access to quick funds in the case of emergencies or unexpected situations. As we offered a quicker, easier and simpler loan application process, our clients were able to depend on us to address their financially difficult situations during this time. We are pleased to have offered our services to over 24,300 people since our inception, supporting numerous individuals financially during their time of need.

With regard to applying for loans, we receive interest from both genders – with 73% comprising males and 27% comprising females. Regionally, we have seen interest in borrowing from across the country and we receive loan applications from individuals located in various districts including Colombo (22%), Gampaha (16%), Kandy (8%), Kurunegala (5%) and Kalutara (5%). Provincially, the most interest is received from three main provinces – Western Province (44%), Central Province (14%) and Southern Province (10%).

To our existing clients, we offered options to help them deal with the situation and ease their financial burden. We offered relief in the form of concessions once the initial lockdowns were lifted – which greatly helped a number of borrowers who were not in a position to make timely repayments. We also offered waive-offs on penalty charges as well as discounts on interest rates to further help customers make their due payments.

If you are still facing difficulty regarding making your loan payments, do reach out to us! Our team is always at hand to provide you assistance in order to ensure that you experience a better financial journey with us. Contact us on +94117877555 or send us an email to info@loanme.lk – our agents are more than happy to talk to you and see what can be done.