Round-up on the Highlights of the Year Gone By 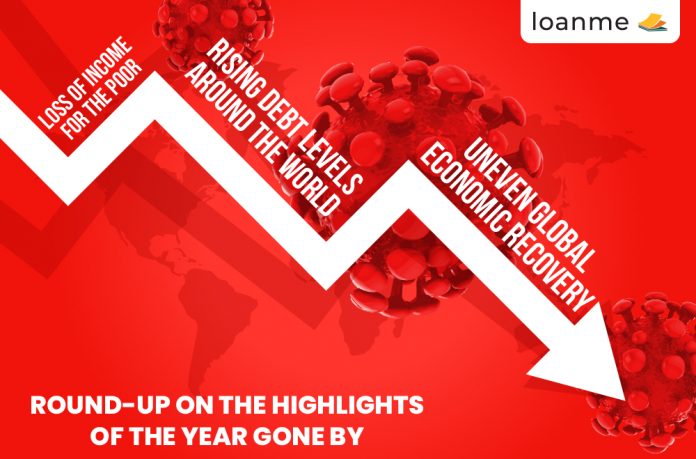 With the new year now upon us, we can take a look back at some of the things that have taken place over the last year; the milestones and challenges that the world has faced collectively. The pandemic raged well into 2021, as expected by many, bringing about many changes and adversity into the lives of many. From an economic point of view, though the global economy grew this year, there is still more work to be done. This article takes a look at some of the highlights that have taken place in 2021 and what we need to keep in mind as we enter the new year.

2021 was a devastating year with regard to the worldwide spread of COVID-19, as the pandemic continued to affect more and more countries – with an increasing number of variants. By mid-year, the Delta variant had quickly become the dominant variant across the globe, wreaking havoc amongst several countries who were only just starting to find their footing since the beginning of the pandemic. An incremental number of deaths made the disease the fourth leading cause of death globally – according to Think Global Health, an initiative of CFR and the University of Washington. Source Some of the countries that suffered the most were the United States – with the highest fatality figures in the world of over 750,000 – as well as India, several European countries and Latin America – including Brazil and Mexico. However, some positives were also to be witnessed over the course of the year, as the global vaccination drive really took off – with a number of COVID-19 vaccines being approved for broad use across different parts of the world. Despite the high rate of spread of the disease, global vaccination has proved to be effective in bringing down infections and in helping to curb potential new waves.

2) Loss of Income for the Poor

Poor people bore the economic brunt of Covid-19 as it continued to ravage through entire industries even as the world entered its second year of the pandemic. The poorest 20% were financially impacted the most when compared to richer people and nations. Source Their incomes took a sharp downturn during the first waves of the pandemic and it continued to decline in 2021 while their richer counterparts were able to enter a recovery phase this year. This has led to more than a hundred million people to live in extreme levels of poverty around the world as jobs were lost, salaries were reduced and prices of goods skyrocketed. While the world slowly starts to get back on its feet, it is expected to take much longer for the benefits of economic recovery to trickle down to the poor.

3) Rising Debt Levels Around the World

The global economic disruption was exacerbated by the rising debt levels around the world as entire nations and entities had to borrow money to stay afloat. This was especially apparent in developing nations and emerging markets which didn’t have sufficient reserves to compensate for the losses in income. In fact, most of them were already in heavy debt or in high debt risk situations. While the first year of the pandemic saw emergency decision-making and reactive policy making as an immediate response to Covid-19, 2021 was a year where plans for long-term economic recovery were being considered. These nations will have to strike a careful balance between continued debt financing to invigorate local economies while reducing public spending in order to achieve effective debt sustainability.

As is the case with access to vaccines, there is an emerging gap in the economic recovery between high-income and low- and middle-income economies. The Global Economic Prospects report states that global economic recovery will be uneven, despite the global economy being on track to grow at a rate of 5.6% this year – which is the best post-recession growth that the world has seen in 80 years. Source Economic growth is also believed to be contingent on the continued development and deployment of vaccines globally, to help the financial conditions of economies across the world. However, with only 7% of the residents of low income nations having access to the vaccine compared to the 75% in high income countries, it appears that this inequality in vaccine distribution will consequently result in uneven global economic recovery, with poorer nations struggling to get back on their feet.

The world took renewed interest in the climate crisis during 2021 as several key reports from regulatory bodies showed that the world was heading towards dangerous planetary overheating. Apart from the pandemic, 2021 saw some effects of this climate change with catastrophic flooding and wildfires in different parts of the world. The COP26 UN Climate Change Conference made headlines in November as it convened several large nations to take further actionable decisions regarding the 2015 Paris Agreement on Climate Change. Several significant achievements were realised during this two week event, such as the agreement to align USD 130 trillion (which comes to about 40% of the world’s financial assets) with the climate change goals in the Paris Agreement. Source One of the key talking points during this was the call for the conscientious use of fossil fuels, especially the reduction in coal. The urgency to address climate change is felt now more than ever as the world temperatures have already risen by 1.2 degrees while the liveable maximum is considered a 1.5 degree increase. While 2021 had its fair share of ups and downs, it was also a year of recovery as the world slowly but surely started getting to its feet after the initial impacts of Covid-19 the previous year. Although the economic impacts will continue to be severely felt for the upcoming years, especially by poorer nations, there is no denying that there is a definite upward trend. Therefore, even though 2022 is still filled with extreme uncertainty, there is some semblance of hope that can be expected of the upcoming year.

Though having a look back at the past provides several great insights, it is more important to be prepared and geared up to face the year ahead – with a positive and resilient mindset. It is likely that this year will bring about its fair share of challenges and it is up to us to know how to tackle them.

The pandemic and the future of health has been a topic of concern over the last couple of years and will continue to be one during the upcoming year as well. Telehealth is expected to become commonplace, whilst the new approach to developing vaccines will be considered to be amongst the most important medical breakthroughs of the century.

Another trend that is expected to continue in 2022 is the Great Resignation – where masses of employees are giving up their 9 to 5 jobs and learning to reprioritise their lives. Most employees have shown significant preference for remote work as it allows them to focus on other aspects of their lives that are important to them, such as spending time with family and loved ones. In terms of the economy, the global economy is expected to grow by about 4% in 2022, compared with an estimated 5.1% in 2021, according to the Centre for Economics and Business Research (CEBR). Source However, inflation is expected to be an issue – with the inflation of real estate and cars something that should be closely watched in the year ahead. Source