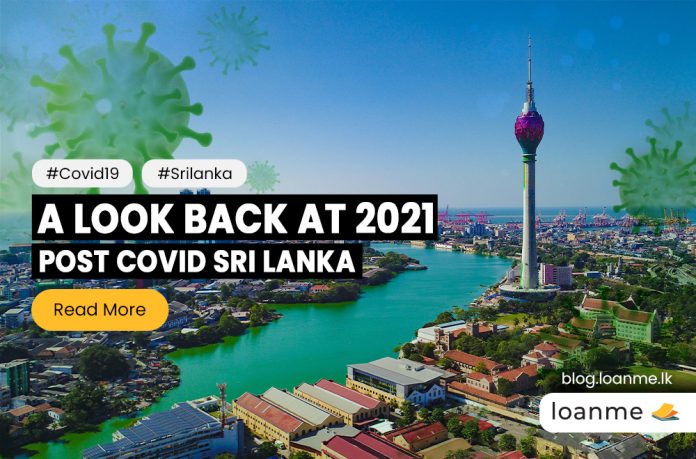 The pandemic has had a major toll on everyone’s lives across the globe. It has affected economies, financial markets, healthcare systems and lifestyles in unprecedented ways, with the world scrambling to find ways to cope with the extremely volatile situation at hand. Despite the ever-growing number of infections and increasing death toll, the year 2021 did see its fair share of positives – such as heavy vaccination drives in several counties. This article takes a look back at the year 2021 and what insights we can take away from the year, to shape our lives ahead.

When compared with 2020, the country’s economy fared well and rebounded from the initial contraction that was caused by the pandemic. The first half of 2021 saw a growth of 8.0% year-on-year, showcasing positive signs that major sectors of the economy were gradually recovering.[Source] Economic growth was attributed to numerous policies implemented by the Government and the Central Bank of Sri Lanka across a broad range of businesses and sectors, as well as fewer lockdowns and mobility restrictions and the country’s powerful vaccination programme – which helped normalise global activity.

A Drop in Gross Official Reserves

Gross Official Reserves saw a heavy decline from USD 5.7 billion towards the end of 2020 to USD 2.7 billion by the month of September 2021. [Source] A loss of USD 5.5 billion of reserves over the course of the last two years was attributed to the country printing money worth up to 1.5 trillion rupees – done by the Central Bank to expand domestic assets, as well as due to inflation. [Source] Rating downgrades also had an impact on foreign currency inflows resulting in lesser money coming in than expected, as investor confidence was heavily affected. Despite foriegn reserves reaching US$3.1bn by the end of December 2021, a drop of 24% was seen in January 2022 due to the repayment of sovereign bonds as well as dollar denominated local law bonds. [Source]

The National Consumer Price Index stated that nation-wide inflation in the country rose to 14% by the month of December 2021 – an increase from 11.1% – due to unprecedented levels of money printing in order to maintain low interest rates amid a surging budget deficit and downward pressure on the rupee. [Source] Food prices also increased by 6.3% while other non-food prices increased by 1.3%. Due to the Central Bank’s inflationary policy of buying back bonds from old deficits, food prices have been seeing an incline since August 2019. The accelerating inflation rate also made Sri Lanka the country with the fastest inflation rates in Asia, having surged past Pakistan to claim the number one spot.

Despite the gloomy outlook, a more positive tone was to be seen with regard to tourism. Sri Lanka’s tourism industry gathered momentum with improving global travel and the successful COVID19 vaccination drive worldwide. Sri Lanka recorded over 150,000 international tourist arrivals in 2021, seeing a peak of over 47,000 arrivals in the month of December alone. [Source] Ongoing promotions and campaigns were consistently carried out by the country’s tourism ministry and Sri Lankan Airlines across cities around the world. The key source market in December was India with 19,574 Indian tourists visiting the country followed by Russia with 7,951 Russian tourists and the United Kingdom with 6,819 British tourists. This has been the highest reported number of tourist arrivals to Sri Lanka in 20 months. [Source] Tourism officials have an optimistic outlook for the year 2022 and are expecting close to 100,000 arrivals per month – despite this being only 50% of monthly arrivals received in 2018. However, business consultancy McKinsey & Company predicts that Sri Lanka will take as long as 5 years to reach the tourist arrival figures that were recorded in 2018 due to various international and domestic factors that affect the sector. [Source]

However, as the credibility on an exchange rate peg was lost due to earlier money printing, the central bank was unable to sell down the bills permanently which led to outflows exceeding inflows (a balance of payments deficit) and the emergence of parallel markets due to partial convertibility.

What are the Key Takeaways?

Though major bumps are foreseen for the year ahead, it is important to look at a long term solution in terms of addressing challenges, as opposed to short term thinking. The pandemic has been a difficult period of time for several economies across the globe and by fostering a collective positive approach, countries can gradually recover and rebuild, until they reach desired levels of stability.